Home On the Record

Below is an excerpt from author Orland French’s book, PIONEERING: A History of Loyalist College (1992). While some references are no longer current, the publication provides a rich report on Loyalist’s history, which helps to contextualize its milestones. To read more from Mr. French’s book, please click here. 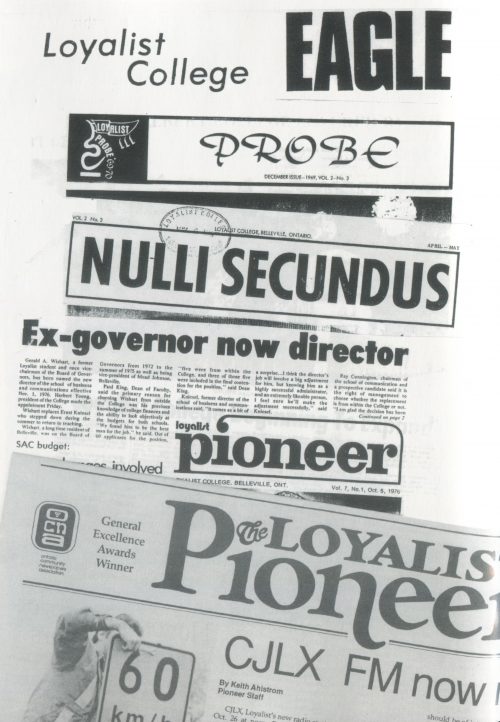 The Pioneer, that stalwart weekly newspaper produced by the College’s Journalism program, is only the most recent chronicler of events on campus. One of the earliest publications was the pretentious sounding Nulli Secundus. It was a serious publication which reported the news and explored social issues. But when it began to probe into the extent of drug use in the Quinte Region in a series of articles in 1969, it learned that some people would rather “shoot the messenger” than hear the message.

A front-page editorial of Nulli Secundus denied that it was “pushing dope” by writing about drug use. The newspaper claimed it was “campaigning to expose the dangers of drug misuse.”

A magazine format was followed by Probe, a monthly publication which provided more extensive background on stories related to the College. It also featured – this was 1969, remember – a “Miss of the Month”. Miss November, for instance, was described as “pretty, blue-eyed, five feet, four inches of charming personality and a good looker”.

Probe was followed by the Myopic Eagle. Published bi-monthly by Journalism students, the Eagle continued to provide news coverage of the College. Occasionally, other literary publications appeared such as Grassroots in the 1970s.

The longest-serving publication has been The Pioneer, produced by Journalism students as part of their hands-on training. The newspaper has received a number of awards for excellence in competitions against newspapers produced by other colleges and universities.

Altogether, The Pioneer and its predecessors have provided 23 years of news service to the Loyalist College community.