Loyalist Separated From Twin At Birth

Below is an excerpt from author Orland French’s book, PIONEERING: A History of Loyalist College (1992). While some references are no longer current, the publication provides a rich report on Loyalist’s history, which helps to contextualize its milestones. To read more from Mr. French’s book, please click here. 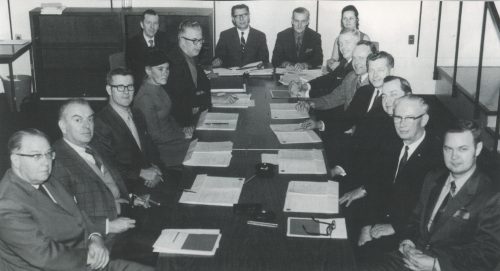 Loyalist College Board of Governors. Circa 1970.

Loyalist College was originally born as a twin of Sir Sandford Fleming College in Peterborough. They were separated shortly after birth. Fertile bureaucratic minds in the Ministry of Education in Toronto had divided the province into geographic regions, allotting one community college per area. Belleville was to share Area 3 with Peterborough. A single college would serve the Counties of Hastings, Prince Edward, Northumberland, Lennox and Addington, Peterborough, Haliburton and Victoria.

Local promoters of a community college for Hastings and Prince Edward counties were not pleased.

J. Kenneth Bradford, first president of Loyalist, described in an essay how someone had “blue-pencilled” a great circle centering on Lindsay and Peterborough as the community for one of the colleges. The trouble was, he noted, the arbitrary circle on the map ignored reality. Transportation routes ran east and west, not north and south and the people of Prince Edward County and lower Hasting County had little contact with the Peterborough area. Residents who lived in the lower half of the designated circle feared that the lack of natural contact with the Peterborough area would not only be “to the disadvantage of Belleville and Trenton, but to the entire population of Prince Edward County.”

The province proposed a compromise: a split campus run by a dual board of governors and supervised by a pair of presidents.

Leslie Frost, a member of the Board and a former Premier of Ontario, pushed for a third campus in or near his home town of Lindsay. At a meeting with education officials in Toronto, Frost protested that the arbitrary locations of community colleges were chosen by “people who sit in Toronto and . . . don’t understand the geography of the country”.

For a while, the College was officially called Sir Sandford Fleming-Loyalist. President Bradford observed, “The official name. . . not only confused the general public who usually addressed mail to the first of the two names (we lost some good academic prospects and students in that manner), but even the provincial civil service fell into the trap. Vital directives were lost to us for weeks or even months until someone became aware of their existence.”

The College with the dual personality soon proved unworkable. As a result, Loyalist got its own Board of Governors, its own President, its own campus and its own unhyphenated name.